Popular macroeconomics topics include measurement of macroeconomic variables such as GDP, GDP per capita, CPI, inflation, unemployment. The second part of intermediate macro starts with long-run growth including Solow growth model and Romer’s addition to the Solow model. Third part of the curriculum focuses on short-run macroeconomic fluctuations. This part is divided in Keynesian and Classical economics extending from IS-LM framework to AD-AS framework. 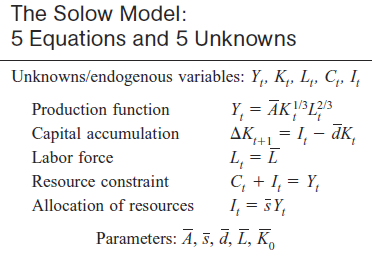 The figure above shows five key equations of the Solow Model. First, the production function is a standard Cobb-Douglas function that exhibits constant returns to scale with exogenous technology. Second, the equation for capital accumulation shows the motion of capital. Simply put, it states that the capital available next year is equal to capital available today plus investment less depreciation of existing capital. This key equation shows how capital increases (is accumulated) over time.

The allocation of resources constraint says that investment is equal to national savings, which in turn depend on a constant saving rate times national income. Further, each unit of saving converts to a unit of capital.

The labor force is held constant, meaning there is no population growth.